Oakley vs Oakley and Oakley

There has always been friendly competition within the BSHA Planet Ice League, but this year sees what might be the first family-based rivalry. 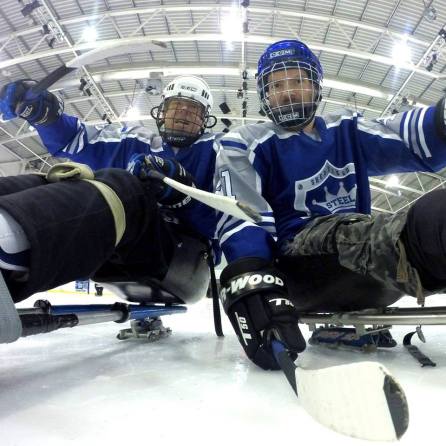 Anyone familiar with the Steelkings (or Sheffield ice hockey in general) will probably know Jake Oakley, and most of those people will also be familiar with his dad, John, even if they don’t realise it.  You’ve probably seen them at ice hockey games around the country, and sometimes the world, wearing crazy customer-designed suits, including bright orange ones at Sheffield Steelers games and representing GB with Union Flag suits.

Jake has been with the Steelkings for a while now, and was joined soon after by John. Both picked the game up quickly, becoming integral parts of the team and both will be in the lineup when we play our first season games.

But two Oakleys in the league obviously wasn’t enough. Els Oakley, John’s daughter and Jake’s sister, recently popped along to the Manchester Phoenix sledge team to give it a try.

I love trying things new and exciting and sledge hockey was definitely one of those. I enquired about it and was greeted with a warm reception which made me feel very welcome – I was worried in case I was unwelcome or even offended anyone as it’s a Paralympic sport. As it was, I was encouraged to try it – so I gave it a go and loved it!

None of the Oakleys had played sledge hockey before, but all three are big ice hockey fans, with them regularly meeting up at Sheffield Steelers games during the season and it was this love of ice hockey that drew them towards sledge hockey.

But despite being family, Els certainly isn’t planning on taking it easy on the Steelkings.

Jake’s very competitive and out to win, so I best give him a run for his money! As for my ol’ pap… love you! But its still hockey – bring it on!

There’s no way that either Jake or John – or the rest of the Steelkings – are going to take that laying down.  No matter the names on the back of the shirts, it’s the names on the front that will remain at the forefront of everyone’s minds. As John says:

From the moment she was born I swore to love and protect her – but then sledge hockey came along!

The Steelkings and the Phoenix don’t face each other on the ice until June, but when they do, it’s on consecutive weekends. Phoenix play host tomorrow (Saturday 20th June) at Silverblades Altrincham with face off at 6:30pm, and then they head up here to Yorkshire next Saturday on 27th June for a 9:30pm face off at IceSheffield.  As always, all games are completely free entry.

Posted on 19 June 2015, in Games, Media. Bookmark the permalink. Comments Off on Oakley vs Oakley and Oakley.