Established in September 2014, and with only 5 players the Steelkings were a small but determined team, with the goal of competing against other teams around the UK in the (then) 2015 British Sledge Hockey Association (BSHA) league.

Our first competition on the ice was a friendly game against the (then) Manchester Phoenix Sledge Hockey Club (now, Manchester Mayhem Para Ice Hockey Club). Due to a lack of players this game was played as 4-on-4 rather than the normal 5-on-5.

The experience of Manchester showed as the Steelkings were defeated 7-0. This, however, made the team even more competitive and determined that they would not go down without a fight.

The 2015 and 2016 seasons were still a challenge to the team as we faced the more experienced competition throughout the league, however with the addition of new members, improved coaching techniques and good old fashioned hard work, the Steelkings have graduated from being the small group of friends who took on Manchester in December 2014, to a full and competitive Para Ice Hockey team.

In 2017 the team took their first ever win in a league competition and beat a travelling Manchester team 10-2 in front of a capacity crowd on IceSheffield’s Pad 2.

What made this victory even more special was that the Steelkings were without both starting goalies.

This win wouldn’t be the club’s last and we are now working hard to be competitive and challenge for a league and playoff title.

Make sure you come down and cheer us on at our next home game, and see what the Sheffield Steelkings and Para Ice Hockey is all about. 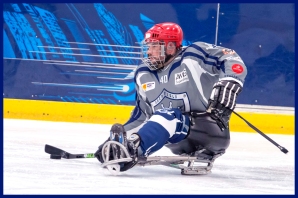